Race to the Top was a game I found on the Math in the Middle blog. I thought it would be great to practice integer addition, multiplication, addition, and subtraction. I think I will also keep the game in my file for emergency sub activities. 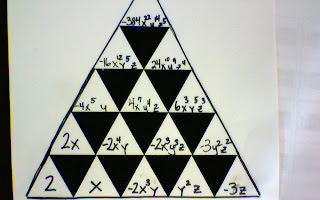 I think before we play this game, I will show the students the most famous triangle of all: Pascal’s Triangle. Last year, I had all the 7th grade students figure out this triangle as part of a puzzle/find patterns warm-up. I gave them a partially-blank triangle where just enough was filled-in so they could find the pattern (first three rows completed and then partial completion for the next row, and then even less for the fifth row). I asked the students to think how did I know what numbers to put into the triangle. Then later in the year, the Geometry students had a shortened class period and so I asked them to help me design and create the Pascal’s Triangle to hang on the classroom wall. It turned out pretty cool! Students still ask me for a huge, blank Pascal’s triangle.